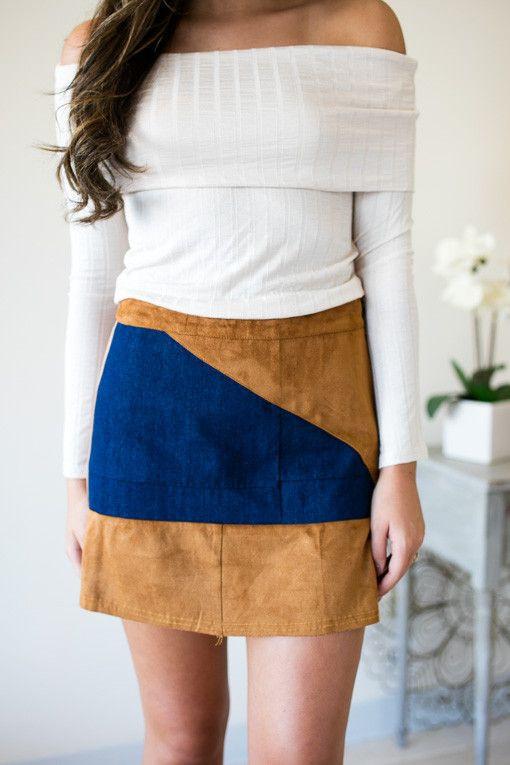 Fancy making a statement this fall with your outfit? Well, then corduroy skirts are your answer. Corduroy skirts have been in fashion for a very long time. In fact, many retro outfits boasted of skirts in corduroy paired with a frilled top. When it comes to corduroy skirts, Taylor Swift is the real icon. While this singer has been known for her courageous fashion and obsession with chic retro clothing, Taylor Swift was seen many at times in public with outfits of short corduroy skirt.

Beginning in the 20th century, skirts were a huge thing among the working women. It was comfortable to walk in and easy to handle. They also formed the basic outfit for family occasions and more. However as fashion trends waxed and waned, skirts slowly lost their game to the denim that was revolutionizing the industry. Skirts, including that of corduroy, were sidelined to special occasions. But they did have their identity and has been in style in a minimal sense. This fall let us rediscover corduroy skirts and their antique charm, to add to the wardrobe.

Fall being the season will a cool weather, corduroy skirts are perfect for your attire. Comfortable fabric, with its velvety and ridged texture, these will keep your warm without having to cover in multiple layers of clothing. Unlike skirts of other fabric, corduroy ensures that the skirt is firm and steady. Being corduroy, these need to not be iron as well. Since the fabric is quite heavy, having a fully fledged, a complete pleated skirt can add a lot of weight to your skirt. This is why corduroy skirt comes with fewer pleats or no-pleat designs. In this respect, buttoned down corduroy skirts are a real trend.

How to Wear Them?

Picking the right color is essential when it comes to matching a skirt and top. As for corduroy skirts, the usual trends are. dark shades paired with a light or pale colored top. However, this doesn’t mean that you should stick to the clichés. Corduroys are brilliant in gray and pastel shades too. If you are a person of retro tastes, a brown corduroy skirts would do you well. Team this up with a beige blouse and you can indulge in your retro-ness.

For short corduroy skirt designs, you can pair it with a full sleeve body- hugging sweater for a trendy look. If you are going for mid length or longer designs, you have a plethora of options. A crop top would pair well with a long corduroy skirt, at the same time, lending a designer look to your outfit. A shirt tucked in would be another way to make your corduroy skirt outfit splendid!

lotusboutique.com, has an amazing collection of corduroy skirts to compliment your fall outfit. Browse their catalog of fall collection to find your perfect skirt. Handpicked by their designers, these belong to the latest trends in fashion. Shop for the trendiest corduroy outfit at lotusboutique.com, the one stop for all your fashion needs!

Embracing the true flavours of North India, Copper Chimney is hosting ‘The Great Indian Kabab Festival’ with a variety of kababs specially prepared in Indian spices, herbs, and garnishes, this festival is truly a grand ‘desi’ treat.

Winters are the ideal time to dig in the unforgettable experience of food. Enjoy the delicious rustic and smoky flavours of kababs, only at Copper Chimney. The ‘The great Indian Kabab Festival’ will give you an authentic taste of Kababs throughout the month. Choose from vegetarians & Non-vegerterian Kababs like ‘Kashmiri Paneer, ‘Sialkoti Aloo’, ‘Dilli ki lal tikki’, ‘Masala Tandoori Wings’, ‘Nimbo Mirch Macchi’, and ‘Baluchi Chicken’ et al.

Laughter truly is the best medicine, there can be nothing better than to hold on to your stomach and roll on the floor laughing to the content of your heart. But in today’s stressful life, laughter doesn’t come easy and at such a time the Mon-Key Shanti Theatre Festival by 3 Bells Productions came in as a perfect rescue. Its a two day long theatre festival that brings five of the country’s top running shows, not just comedy but also some soul searching dramas. This was the second season for the festival and I am sure it would be much more successful than their earlier edition.

Today being the first day, two shows were planned and both were in the genre of comedy. The first play was ‘Perfect Wedding’. An English Comedy Play ‘Perfect Wedding’, directed by Dushyant Babbar is a laughter riot with chaos and confusion created by an appalling situation.

A bridegroom wakes on his wedding morning in his own bridal suite, with his bride-to-be about to arrive any moment, and finds a strange girl in bed beside him. What’s more an extremely attractive girl whom, in the depths of his post stag-night hangover, he can’t remotely remember even having been introduced to. Worse – during the ensuing panic to get the stranger dressed and out of the way, the bride arrives, the girl is trapped in the bathroom, the best man pretends the hidden girl is his girl friend, his real girl friend has to be kept ignorant of the fact, and the hotel chamber maid gets mistaken for everybody’s girl friend. By the time the bride’s parents and half the hotel staff get in on the act, the chaos reaches nuclear proportions! It is that rare combination – a riotous comedy and a touching love story at the same time.

Dushant’s direction and his acting, both were commendable. He was simply the show stealer with his spontaneous act. Also the show is written very well, the dialogues are real and one can easily relate to them, they are simple to understand and yet very impactful. I loved the play and thoroughly enjoyed the confusions. There was a subtle message in the play that one needs to really be very sure of the decisions we make in life and especially like getting married to someone. One should not just go by what others say but really evaluate if we have found the right person and then only take such a big decision of life.

Written and directed by M. Sayeed Alam, a political science teacher-turned-full time-theatre practitioner ‘Cut…Cut…Cut’ was the second show of the evening and having seen Ghalib in Delhi by Sayeed Alam, my expectations from this show were super high and I wasn’t disappointed a bit. Slapstick comedy which is built in day to day situations is an art that Sayeed Alam captures very well in his plays.

Tragedy for them…comedy for us ‘CutCutCut’ comically deals with the chaos, catastrophes and calamities that strike Pierrot’s Troupe whenever it rehearses a play.
In the process, the play brings forth funny characters; hilarious situations; comic relationships and bizarre events, besides taking an amusing look into many more problems that a theatre group faces.

The play opens with the director being stressed and harassed rehearsing for his upcoming show with his bunch of actors and the script writer whose only job is to correct the horribly wrong accent or ‘Talafuz’ (as called in the play) of the actors. The ego clashes between the director and script writer leave people in splits. The comedy isn’t forced, but built in beautifully in the situations. As they day of performance comes nearer, the irritation of the director keeps increasing, and so does the chaos. Finally the day of performance arises and is showcased very beautifully with both back stage and on stage drama. How the director keeps improvising his actors and prompts them to do better, his frustration on their wrongs and constant contrast of backstage and on stage is sheer fun to watch.

Harish Chabbra who plays the role of the director was truly the show stopper. His acting skills are remarkable and the ease that he brings about in his dialogue delivery and his comic timing is just super. Rest of the cast was commendable as well. I really enjoyed the show and look forward to more shows by Pierrot’s Troupe as I have become a big fan of Sayeed Alam’s direction.

It was a Saturday well spent and I am so looking forward to the plays scheduled for tomorrow. If you have missed being at the Mon- Key Shanti Theatre Festival today, please don’t miss it tomorrow. They have some amazing shows lined up. ‘Uproute’ which is a physical theatre piece exploring the subject of home and exile, based on three of Miguel Cervantes’ Exemplary Novels. The performance consists of three short pieces that explore the aforementioned recurring themes in Cervantes’ writing.
Mahesh Dattani’s ‘Dance Like A Man’ centres on an individual’s plight, where a dying form of art serves as the backdrop.
And ‘MASSAGE’ that tells the story of Happy Kumar, a common man who comes to the big city of Mumbai with his pockets empty but dreams of becoming a hero. He passes through ups and downs, successes and failures, hope and despair, joys and sorrows, lanes and by lanes of the city. In this two-hour monologue, Rakesh Bedi enacts 24 different characters.

For tickets and other queries, do follow 3 Bells Productions and make most of The Mon-Key Shanti Theatre Festival.Enjoy!

Kickstart the Monsoon season with a delicious and unique range of beverages by the award-winning Pan Asian restaurant, Mamagoto! With this exclusive beverage menu specially crafted for the pouring season, Mamagoto brings in exciting and unconventional flavours of pop rocks and sangrias bearing refreshing fruits.

Pop Rocks remain a fond childhood memory in India and with their new beverage menu; Mamagoto takes its patrons back to the good old times in a rather quirky way with a delightful selection of pop rocks. The menu boasts of a colourful and enjoyable selection of flavours such as Orange Pop Rock, Mint and Honey Pop Rock, Kiwi and Passion Fruit Pop Rock, and Strawberry and Watermelon Pop Rocks. The sangria and pitchers offerings include revitalizing flavours like Passion Fruit and Kiwi Mojito, Watermelon Caprioska, Long Island Iced Tea, Electric Blue, and Mix Melon Sangria.

Immerse yourself in a tropical breeze this Monsoon, and indulge in zestful offerings at Mamagoto. The rain has never felt better!

Available at Mamagoto outlets across NCR:

Find them on the social media handles below