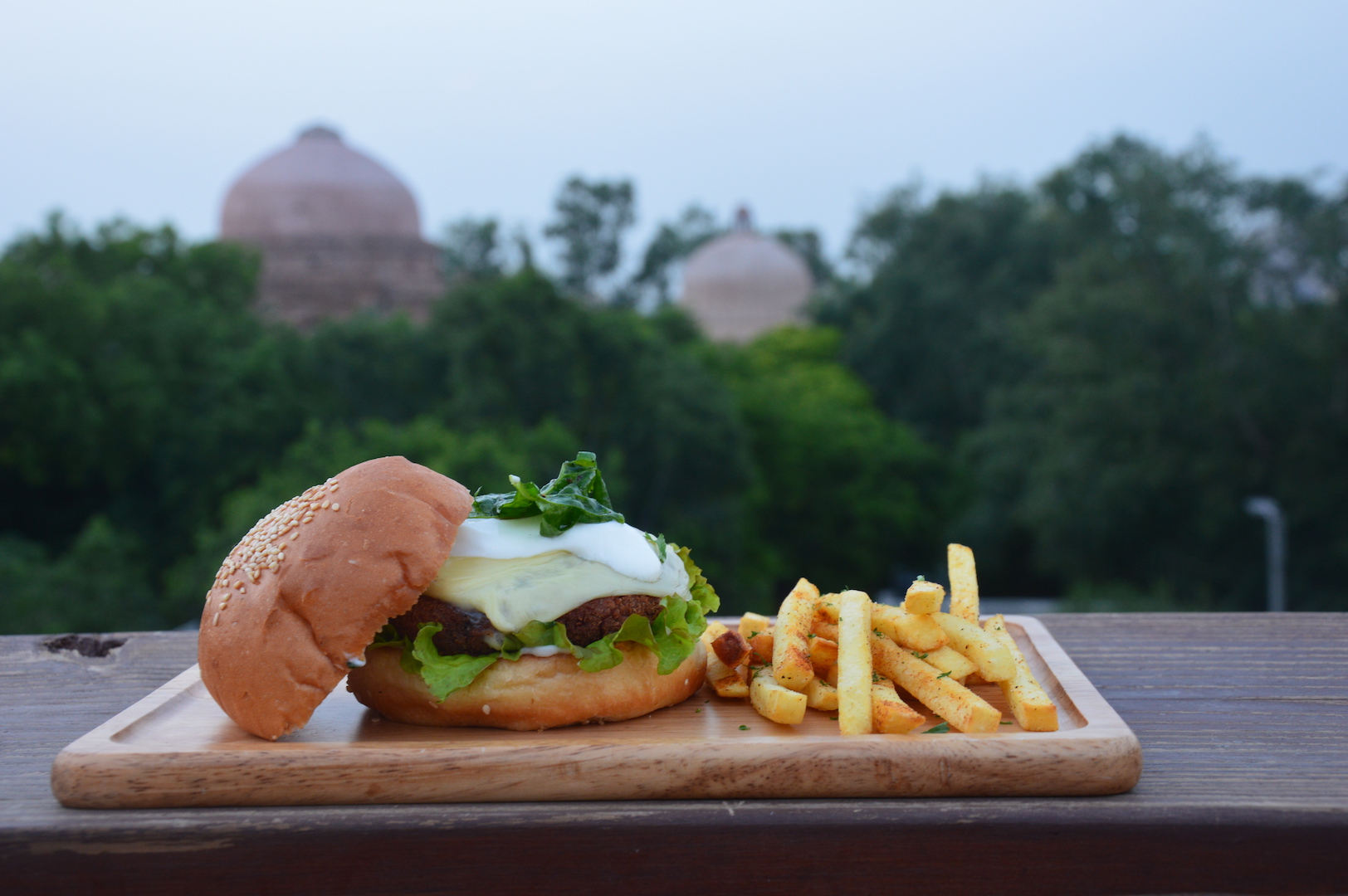 Located in the Aurobindo Complex, Hauzkhas, this place has by far one of the best terraces that I know of. Once you climb up, trust me you don’t want to leave. The view is just awesome and even when its hot out there, they have amazing mist fans, that make you feel as if you sitting in a hill station. Coming to food, they offer European and Continental food with main focus on finger food and smaller plates and burgers, pizzas, hotdogs make for the mains.

We started by ordering Thai Style Chicken Wings, Spicy Kafir Lime Fried Chicken and Sichuan Style Gyoza Dumplings. The wings were nice and juicy and I really liked them. The Kafir Lime Chicken was overpowered with the kafir lime flavour and spices, and hence I did not like it much. The dumplings were good, but I wish the filling was spiced a little better. Followed this was the Chicken Caesar Salad and Roasted Beetroot, Pumpkin, Rocket Leaves & Feta Salad and both the salads were awesome, especially the Beetroot salad, absolutely refreshing and flavoursome. Next we settled for the Mezze Platter, both veg and non-veg and both were delicious. BBQ Ribs and Sichuan Pepper Pork Bao with Green Apples, these both were the winner dishes. You really can’t miss them. The Ribs were so delicious and juicy and so was the bao. The green apple added a different layer of flavouring to the juicy pork, which was a nice change. We tried a half and half pizza with Double Pepperoni and Bolognese Smoked Cheese and also the BBQ Chicken Pizza. The pizzas were superb. Thin crust, crispy and the toppings were great. I loved all three flavours and its hard to choose which was the best, but if I have to be partial even by 1 percent, it would be the BBQ chicken pizza. BBQ Chicken, Caramelised Onions and Blue Cheese, made for a deadly combo. For burgers, we tried the Pulled Tandoori Chicken and Bacon Burger & the Pulled Pork Khao Suey Burger. I was personally a bit disappointed with the tandoori chicken burger, as it did not meet my expectations. Can’t say that it was bad, but somehow it did not gel well with my taste buds. The pork burger was definitely a good one. Even the vegetarians have the Beetroot burger to look upto, my friends said it was awesome. For drinks I tried the Spicy Mango, followed by a Water Melon Mojito and both were really good. For desserts we tried the Poached Pear and Apples with Rum Soaked Sultanas, Raspberry Puree and Ice Cream and also the Bandstand Chocolate Brownie Sundae. Both the desserts were nice but could have been a little better. The Poached Pear dessert was definitely more innovative and tasty than the brownie sundae. The brownie sundae wasn’t bad at all, but it was just a regular dish. This place surely calls for a visit if you haven’t been already, and a visit again, if you have been there before. I thoroughly enjoyed my time here and especially the ambience was so good at the terrace that I wanna go again soon. Bandstand also keeps bringing great artists from time to time, so if you love music, this is the place for you.

True to its name, the moment you step into Orb, you feel the celestial vibes, it feels like a heavenly body, or may be just another planet, but for sure there is something magical about the place. You feel transformed into another world and it also stands true to its name in other way, that it is a circular shaped bar with a huge centre piece of lighting and circular shaped seating around it. The beautiful ambience is marked by the dim blue and pink lighting and with some live DJ music thrown in, it becomes one of the hottest party destination in Delhi. It really makes for the perfect place to hang around with your friends over drinks and music.

Coming to food and drinks, they are as rocking as the ambience of the bar. The bartenders are extremely friendly and they really turn around things to serve finest and most intriguing drinks. When you visit, you ought to try their signature cocktails, they will just blow you over. Khopdi is one such fascinating drink, the process of making it is itself so interesting that yo cant help but keep looking at it for a long time.

Other amazing drinks were Orange Caprioshka, Chilli Chocolate Bunny, Apple Cinnamon Punch, Pale Lady on the Beach and many more..

Finger food to go along with drinks is pretty good too. We tried the Bruschetta, Orb Special Pizza, Achari Fish Tikka and Prawn Tempura. The Bruschetta was really good and so were the Prawns, but I personally loved the Pizza and Achari Fish Tikka the most. The fish was crispy on the outside, perfectly spiced and tender from the inside. The taste of roasted garlic and basil pesto on the pizza was just amazing, I loved it. Chicken Tenders and Cottage Cheese Tikka was good too.

The desserts were the highlight, I tried the Oreo Cookie Baileys Cheese Bar, which was simply awesome. I normally don’t like cheese cakes but this was really nice. Next I tried the Hazelnut Mousse Fudge, which too was nice, but there is a scope for improvement in this one, as I found it a bit dry.

Overall I spent a great evening at Orb, with my friends and we thoroughly enjoyed ourselves, it would be evident if you see the pictures below 😉