Skip to content
Posted on January 30, 2016 by Aditi Malhotra
iRevo Multimedia, founded in Silicon Valley and now firmly focused on the India market released a major software upgrade for its Smart devices with feature enhancements and integral support for Netflix. 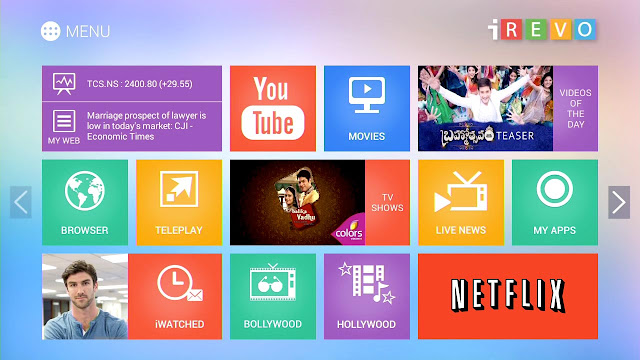 Announcing the new update Mr. Dhimant Bhayani, Founder & CEO of iRevo, said, “We released a new updates for iRevo Smart TV box and iRevo Smart PC. With this Over the Air Update release, iRevo users will be able to install the update on a single click. This update release gives users access to several major enhancements and access to additional content. Major takeaway from this update is the support Netflix and Live News channel on Home screen of iRevo Smart TV Box”.

Further elaborating, Mr Dhimant said, “The way this updates works is that for our Smart TV device users, Netflix will appear as one of the tile on its home page and for iRevo Smart PC box users Netflix will appear as a tile under ‘Movies and TV category’. By clicking on the Netflix Tile, user will now be able to launch the Netflix service. The addition of Live News channel brings live broadcast of Door Darshan, India Today, Aaj Tak, TV9 and others. Other major update is the Event and Content Notification dialog box which notifies user of daily major events for entertainment and sports and direct access to related content.”
The iRevo Smart PC; which became #1 Best Seller on Amazon during initial product launch; comes bundled with a wireless keyboard and a mouse, making it easy to interact when TV (CRT or Flat panel) is used as a PC Monitor. iRevo Smart PC is available at a street price of around Rs 6,000/-. iRevo Smart PC runs Microsoft Office Suite enabling consumers to create Word documents, Excel spread sheets and PowerPoint presentations at no additional cost. Furthermore, users can enjoy web browsing, do emails, Skype with family and friends, or play their favourite games from Google PlayStore. iRevo is proud to support Government of India’s #DigitalIndia initiative and comes with several Apps & Services pre-installed.
iRevo Smart TV; connects to your TV (CRT or Flat Panel) and a world of entertainment is brought to your fingertip. It comes with an Air Mouse remote control that makes it super easy to interact with TV interface software to access and view large variety of content. This iRevo Cloud powered device enables consumers to enjoy TV shows and Live News, Music Videos and Youtube or run Apps like DittoTV, ErosNow, HotStar, Hungama, Netflix and SonyLiv. From devotional songs to kids gaming to Skype – iRevo Smart TV has something for everyone in the family to enjoy. iRevo SmartTV model with IR Remote is available at a street price under Rs. 6,000 and with Air Mouse at around Rs. 6,500/-
Both products have received a number of positive reviews and product recommendations by print media, online media, and bloggers since its launch.
All iRevo Smart devices come with 1 Year warranty and telephone and e-mail based support.
About iRevo Multimedia:
iRevo is founded by an experienced team of Silicon Valley professionals with depth and breadth of knowledge in the area of Consumer, Internet and Device technologies. The team is further strengthened via addition of senior Marketing and Engineering management in India. iRevo is one of a handful of companies that embraced the Cloud based approach (Web Technologies) for TV Everywhere & Smart Devices initiatives, including supporting of mobile devices. We are the inventors of TelePlay screen shifting technology that enables you to browse on your mobile device and play on your TV for multi-screen user experience. The Company is working on a number of initiatives; including TV Everywhere and IoT driven by Cloud managed Smart Devices. For further details visit: http://in.irevomm.com