Skip to content
Posted on January 17, 2016August 3, 2016 by Aditi Malhotra
After successful debut in India with its first restaurant in  Khan Market, now Barcelos launches its second restaurant in the most happening and a very prominent foodies zone, Hauz Khas Village in New Delhi.
Barcelos is famous for its flame grilled Peri Peri menu and has created its own unique following by introducing to the discerning Indian foodie their own brand of innovation. Barcelos revolutionized the concept of the ‘burger’ in India by presenting it in different colors! That apart, they have created a niche for themselves with their innovative salads, beverages like Molecular drinks, boozy shakes and by introducing India’s first Sangria Bar. 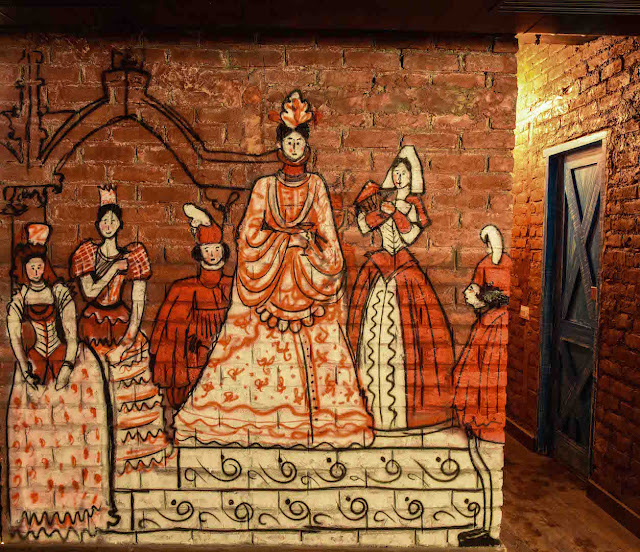 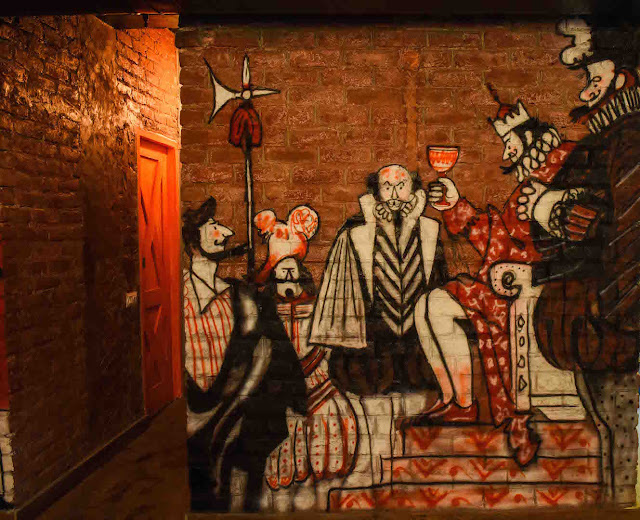 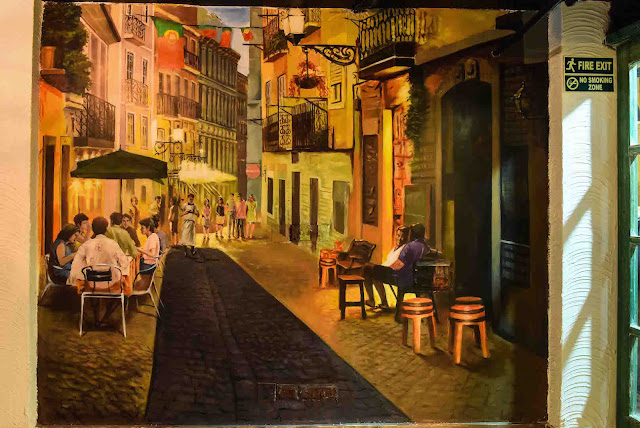 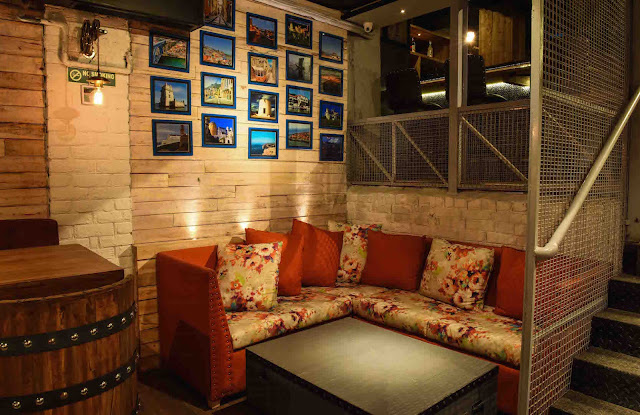 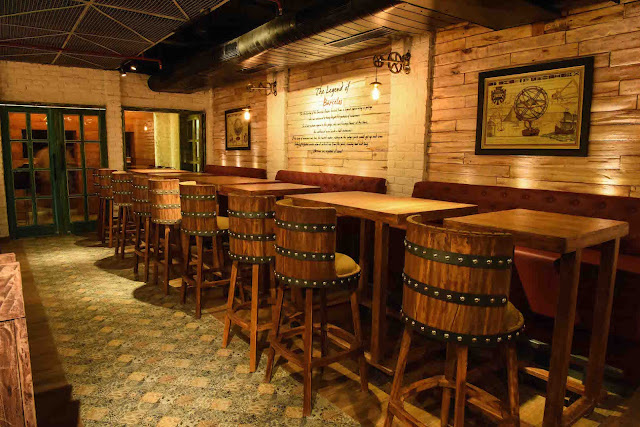 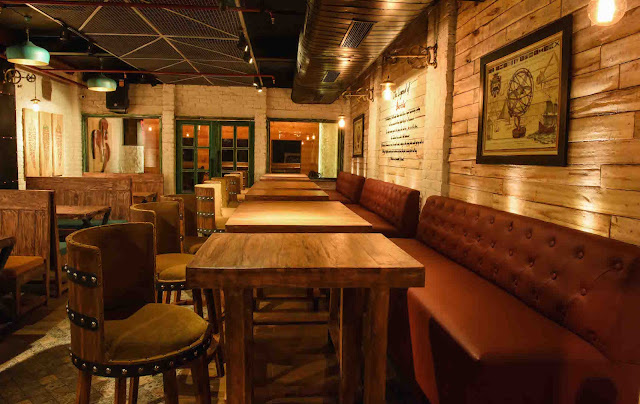 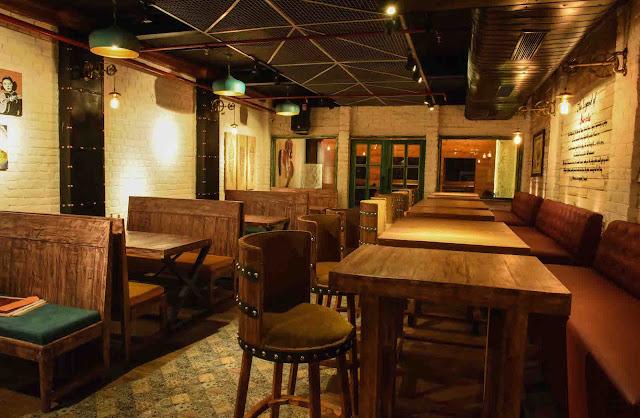 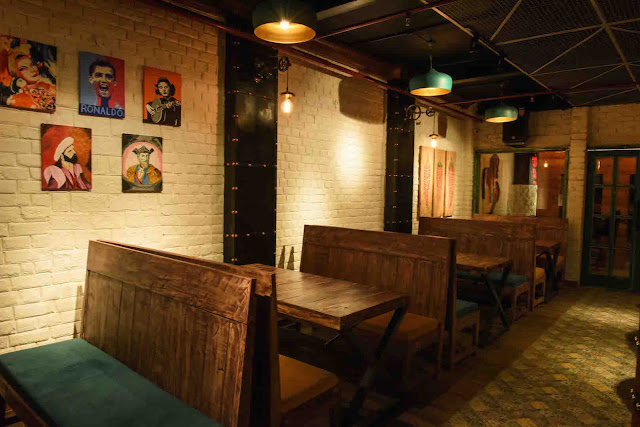 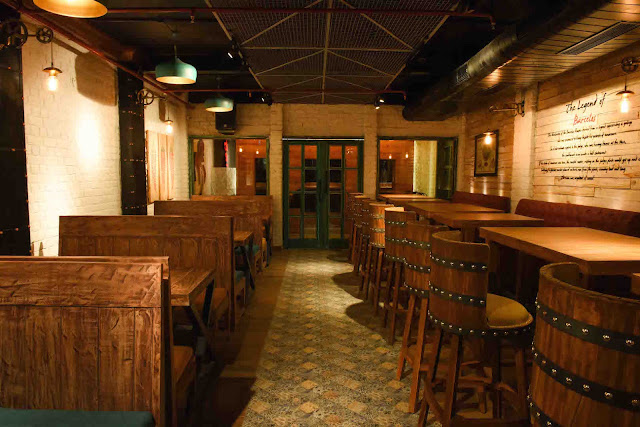 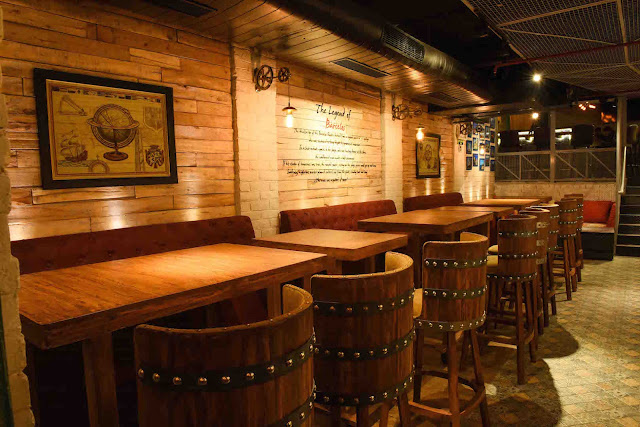 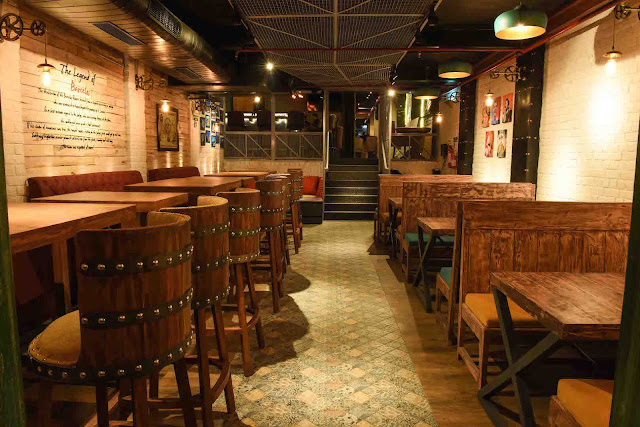 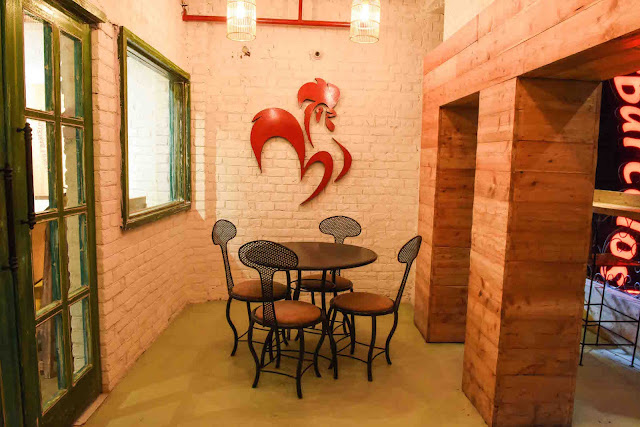 Sometimes its just wonderful to gorge upon a pre-decided menu, where in you don’t need to apply brains on selecting dishes from the menu, and at the same time enjoy best of the food, just sit back and relax, while you get served.
For starters, we were served Pita Bread with assorted dips, a chicken platter which included chicken liver with garlic oil, chicken drumstick, chicken wings and boneless thighs with onion & peppers, along with their signature 4 mini burgers, two of them were mutton and 2 chicken, with a red and black burger of each.
All of the above mentioned dishes were appetising to even look at, and highly tempting, especially the red and black burgers. For a long time, you just wanna look at them and not even eat, they are a photographers delight. When you look at food like this, you truly start believing that food is a work of art, and nature has really blessed us humans to savour things like these. 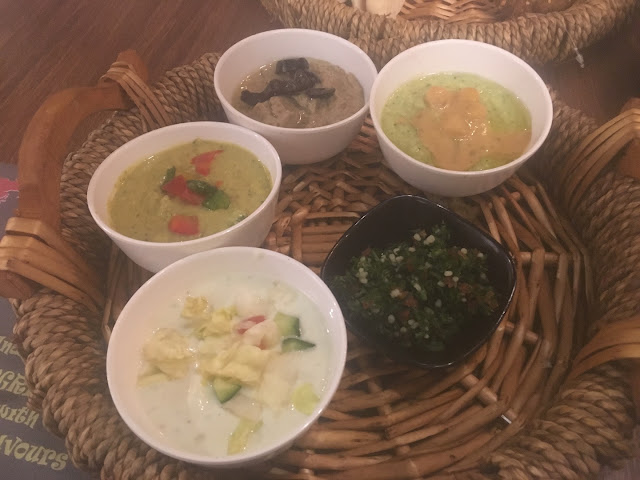 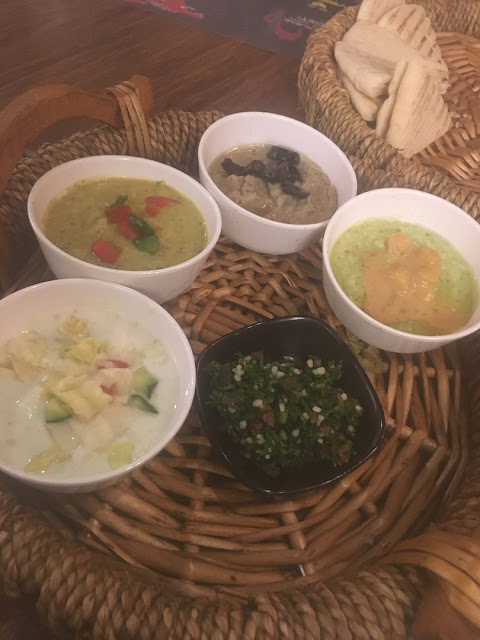 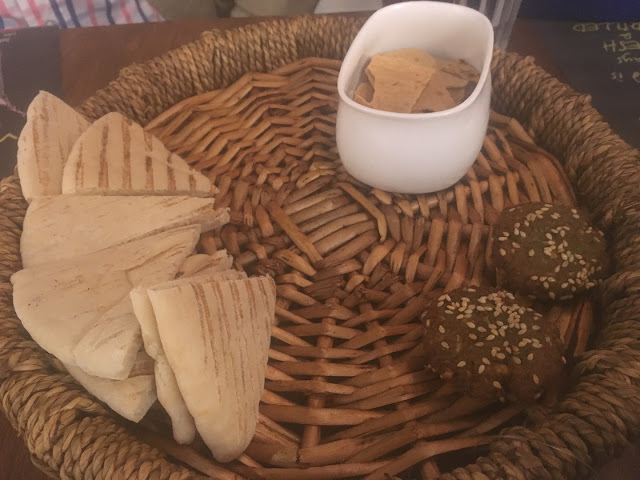 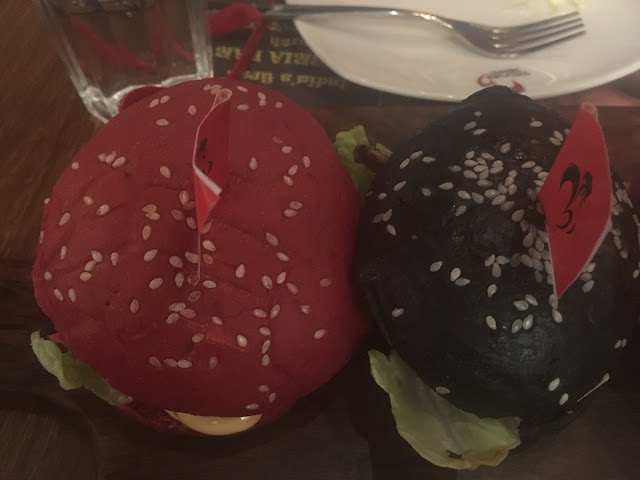 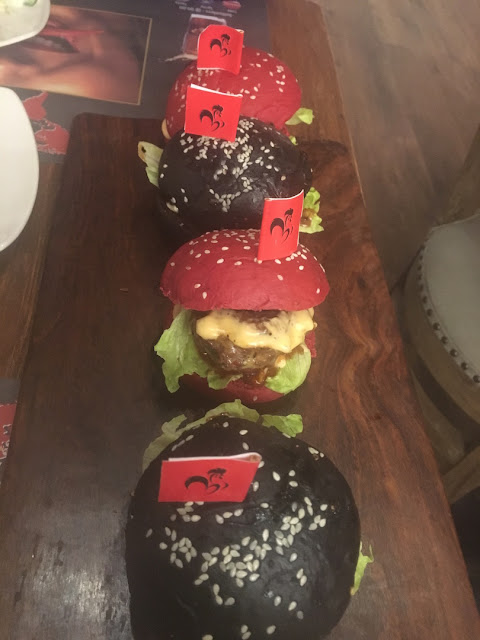 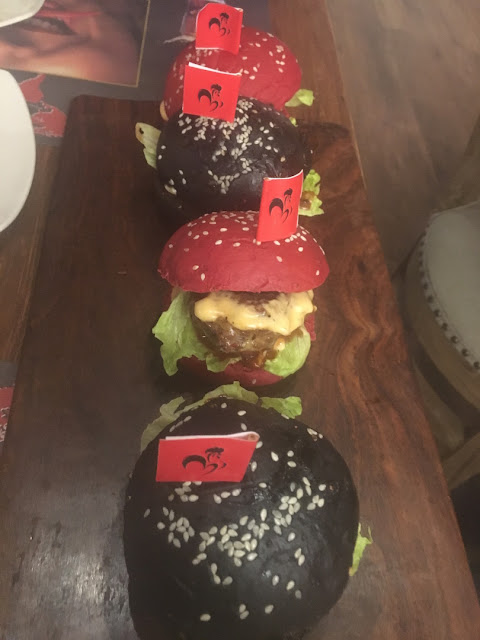 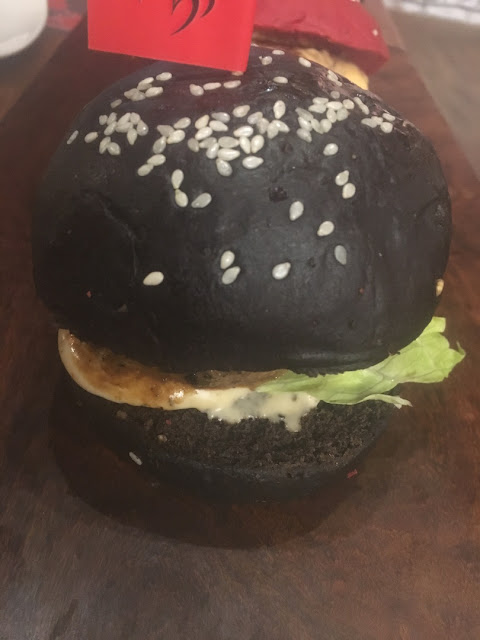 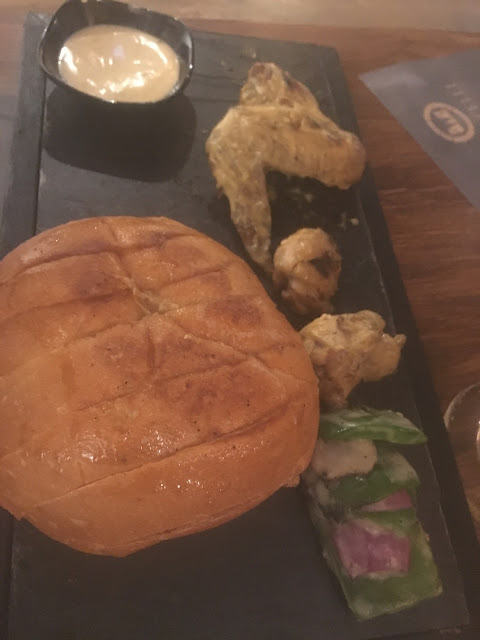 The pita bread platter, was truly awesome, the dips were mouth watering and I just wanted to keep them eating more and more. It also had some nachos and two vegetable cutlets, but the pita bread and dips alone were more than sufficient. The hummus and yogurt dips were the best out of the lot.
Now coming to the non vegetarian platter, the chicken pieces were very tender and delicious, but the only thing was that all the chicken pieces tasted the same, so it didn’t really matter if one was eating a boneless thigh piece or a chicken wing. The flavours were not very distinctly different from each other. Its my personal opinion that a platter means one gets to taste different kinds of dishes in a single combo dish, but here it wasn’t the case. But then may be its because of peri peri being the main ingredient in all of the above.
As for the burgers, after gazing at them for a long time, I thought of finally tasting them and they were as tasty as they looked. I tried both mutton and chicken burgers and they were awesome. I am not too fond of mutton when eating out, but this was an exception and I don’t regret it at all. The mutton was very very juicy and tender and so was the chicken. My only suggestion to the team at Barcelos is that they should make their burger patties slightly bigger, because what happened in both the burgers was that in mere two bites the patty got over while a lot of bun was still left, which doesn’t really work for me. I enjoy burgers in which the patty is as much as a part of the last bite as the bun.
The starters were accompanied by two molecular mocktails,  Tangy Mango and Kiwi Kooler. The tangy mango was somewhat like the Aam Panna that we make at home, the only difference being this didn’t use raw mangoes, so it was more like a masala mango drink and I really enjoyed this one. Kiwi Kooler was good too, very very cool and soothing, and I think it will make for a perfect summer drink. 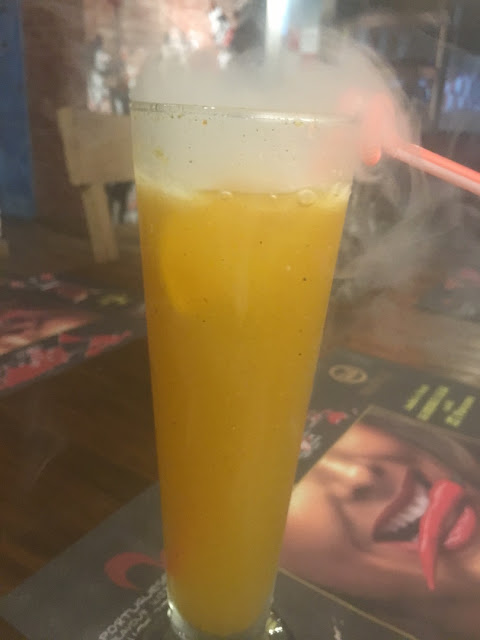 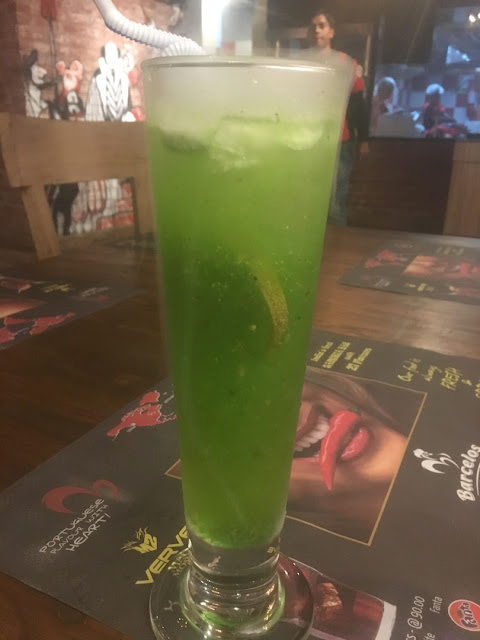 For the mains we were served Chicken Espeteda, Chicken Pita and 1/4Chicken. The mere presentation of Chicken Espeteda left me drooling, the food that looks so good and tempting is like half the battle already won, and if it tastes also awesome, then we get something we say as Sone Pe Suhaga. And this dish truly meant the same, it looked delicious and tasted delicious too. It came with a plateful of fries which were just a perfect accompaniment for the chicken. The chicken hanging in skewers, a plate full of fries at bottom.. aah.. just too good.
The Chicken Pita was made to perfection and held its very authentic taste in place. The bread was soft and the chicken succulent.
1/4 chicken tasted good too, but the only disappointing factor was that almost all chicken items had a very similar taste, it was very difficult to figure out any distinct flavour difference in them, which made the chicken dishes look more repetitive. 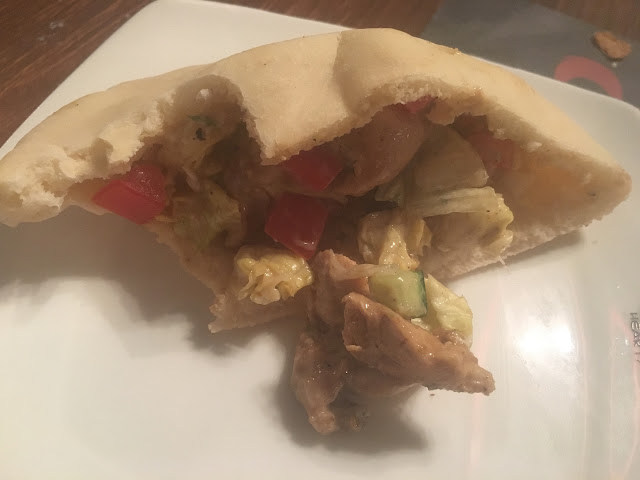 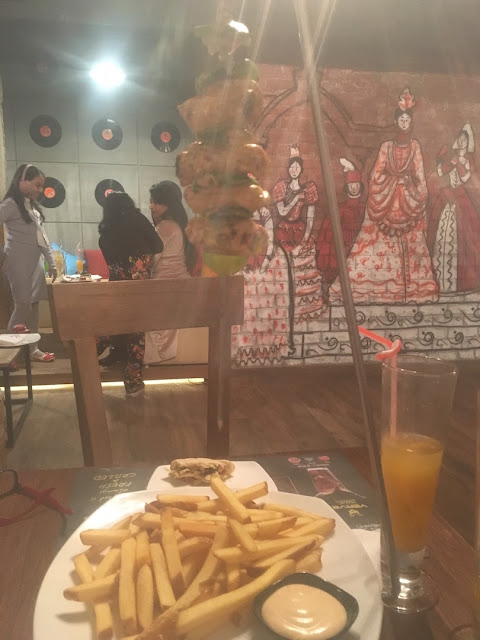 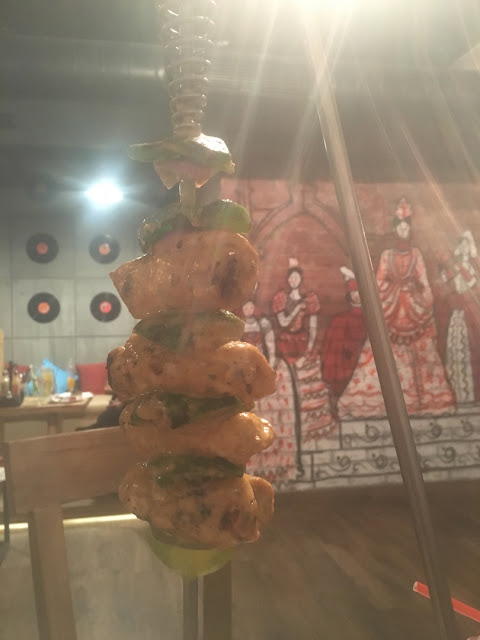 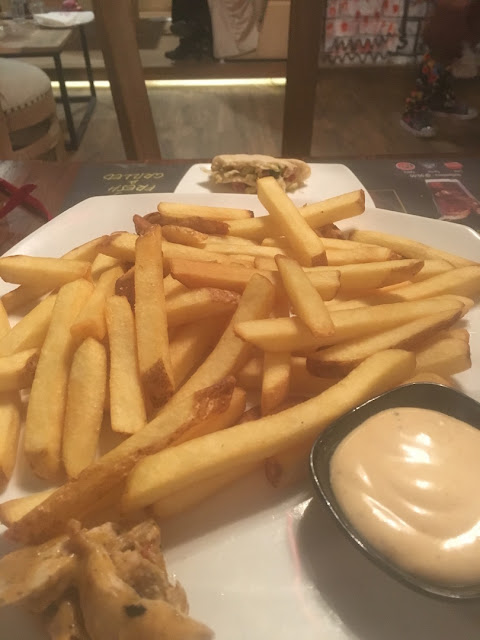 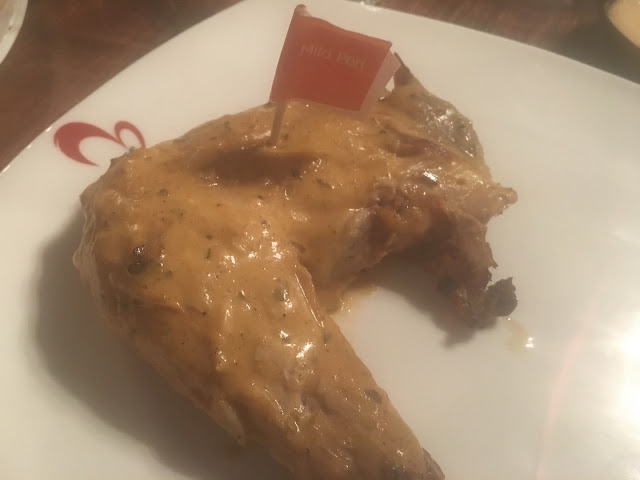 We got a desserts platter, which had a chocolate truffle pastry, a rusk biscuit, and vanilla ice cream on top of a cookie. All the desserts were good, but nothing exceptional about them. I was looking forward to some innovation in this department too, but was little disappointed. I am sure the team will definitely look into the same. 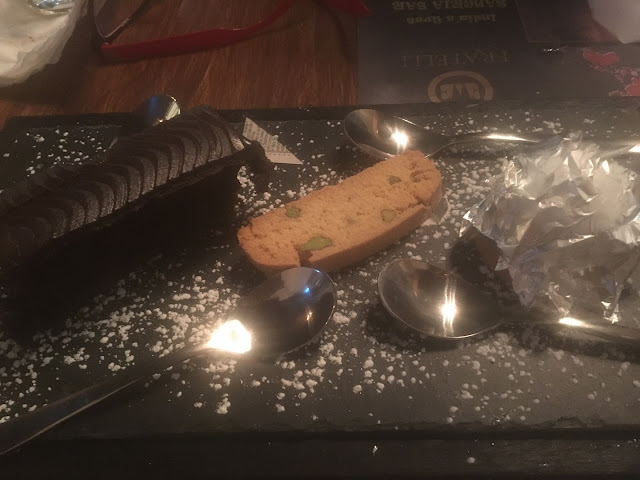 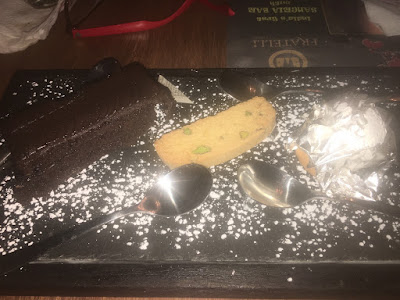 Overall, definitely a place worth visiting, the burgers, and pita bread is highly recommended.